As mentioned below, our sponsored athlete Michelle Wu won the Canberra Half Ironman on the weekend as an Age Grouper!

Check out race pics and report below: 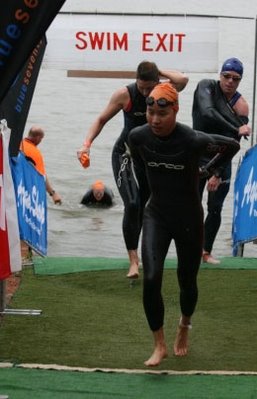 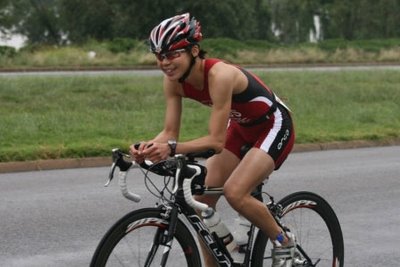 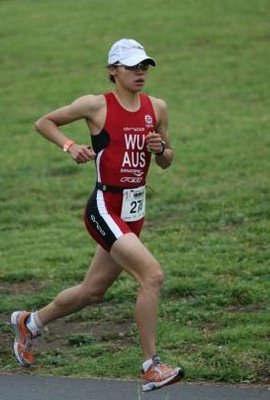 I was in the lead bunch of about 5 other girls for the entire swim, bunny hopping between the feet of one girl, then another!

My biggest queries pre race were:

Loaded with 6 gels on the bike (in the end taking 5), I chose the later, riding pretty much like I would in an Olympic distance race!

I had allowed 3hrs for the ride (about 1hr each lap). First lap went by in 55min, as did the 2nd. 3rd lap however I was starting to feel the pinch of the hills, going round in about 58min.

Much to my surprise, I passed 2 of the Pro Females on the bike leg! Either I was having a great ride, or they were having a bad day. Turned out that I had a pretty strong ride with the 4th fastest split of the Females in 2:51hrs.

Nicely under my target of 3hrs.

For the first time in a race, I opted for socks on the run. Everything was wet (me included!) so on went the wet socks and shoes – an almost guarantee for blisters! However, I was fortunate to not get any.

My pre race goal was to run 4min/km pace.

It seemed a little ambitious at first, but I knew it was definitely possible given I was in the best run shape of my life. A lot also had to do with how well I fuelled myself on the bike!

Thankfully I had taken in enough gels (thanks Hammer Nutrition!) and had the fuel required to hold that pace.

Every km was marked on the run course, and as each km ticked by, I was actually going just under 4min/k. I felt really comfortable on the run, maintaining a constant pace throughout.

Though breathing hard, but in control, I had plenty of cheering on the flat run course which was fantastic.

The finish line was pretty emotional.

My first HIM, and by far the biggest race I’ve ever won!

I had 4 interviews post race and I didn’t even know who the people were! (Apart from the Canberra Times newspaper). It was pretty cool though.

Congrats to the handful of Tridents who also toughed out the long wet day!

I may have won the race, but in my eyes you’re all champions too for getting to the finish line, whether you struggled up Coppins for the 3rd time, or cramped or suffered on the run.

Well done for hanging in there!

Thank you too for all the Tridents out there cheering despite the crappy weather! Especially for the bunch at the top of the Coppins climb (you know who you are!).

You’re a funny lot and made me laugh!

Finally, thanks to super coach and Raeleigh for believing in me.

No, I don't want to download the Secrets of Success

Get a free eBook – Brian Frank's 5 Secrets of Success for Endurance Fuelling. This contains three decades worth of knowledge gained helping athletes fuel successfully for every imaginable endurance endeavor.

Fill out your details below and download the eBook straight to your computer.